The basic principles of why and how airplanes fly apply to all planes, from the Wright Brothers' first machine Wright Flyer to a modern Stealth Bomber, and those principles are the same for radio control and full size airplanes alike.

Although the true physics of flying airplanes are quite complex, the whole subject can be simplified a bit - enough for us to get a fundamental understanding of what makes a plane fly, at least!

Essentially there are 4 aerodynamic forces that act on an airplane in flight; these are lift, drag, thrust and weight (i.e. gravity).

In simple terms, drag is the resistance of air molecules hitting the airplane (the backward force), thrust is the power of the airplane's engine (the forward force), lift is the upward force and weight is the downward force. So for airplanes to fly and stay airborne, the thrust must be greater than the drag and the lift must be greater than the weight (so as you can see, drag opposes thrust and lift opposes weight).

This is certainly the case when an airplane takes off or climbs. However, when it is in straight and level flight the opposing forces of lift and weight are balanced. During a descent, weight exceeds lift and to slow an airplane drag has to overcome thrust.
The picture below shows how these 4 forces act on an airplane in flight: 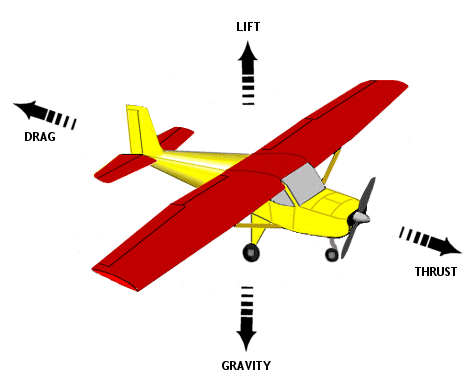 The generation of lift has been an argued theory in the past, but certain principles have been known about and agreed on for a long time now.

A cross section of a typical airplane wing will show the top surface to be more curved than the bottom surface. This shaped profile is called an 'airfoil' (or 'aerofoil') and the shape exists because it's long been proven (since the dawn of flight) that an airfoil generates significantly more lift than opposing drag i.e. it's very efficient at generating lift.

During flight air naturally flows over and beneath the wing and is deflected upwards over the top surface and downwards beneath the lower surface. Any difference in deflection causes a difference in air pressure ('pressure gradient') and because of the airfoil shape the pressure of the deflected air is lower above the airfoil than below it. As a result the wing is 'pushed' upwards by the higher pressure beneath or, you can argue, it is 'sucked' upwards by the lower pressure above.

One of the argued, but commonly discounted, theories of lift generation is related to Newton's 3rd Law of Action & Reaction, whereby the air being deflected downwards off the lower surface of the wing creates an opposite reaction, effectively pushing the wing upwards. This may well be the case but it's the pressure difference between both surfaces that is the commonly agreed factor of lift generation.

Above: the general movement of air over an airfoil.

The faster a wing moves through the air, so the actions are exaggerated and more lift is generated. Conversely, a slower moving wing generally creates less lift.
It's important to note, though, that different wing designs (airfoil and shape) generate lift more (and less) efficiently than other designs at different speeds, depending on what the plane has been designed for.

A direct reaction to lift is drag and this too increases with airspeed. So airfoils need to be designed in a way that maximises lift but minimises drag, in order to be as efficient as possible.

Angle of Attack and lift

Another crucial factor of lift generation is the Angle of Attack - this is the pitch angle at which the wing sits in relation to the relative airflow around it (see pic further up this page).

As the Angle of Attack increases so more lift is generated, but only up to a point until the smooth airflow over the wing starts to break down and so the generation of lift cannot be sustained; this point is called the critical Angle of Attack. When the CAoA is reached the sudden loss of lift results in the wing stalling and the weight of the airplane cannot be supported any longer.
When a stall occurs a sudden loss of altitude is inevitable unless the pilot rectifies the situation immediately by decreasing the AoA and getting the wing to generate lift once again. Typically a stall recovery means simultaneously pushing the nose of the plane down and increasing power to gain airspeed.

The Angle of Attack should not be seen as a lesser important factor in lift generation than the airfoil shape of the wing, in fact the AoA is the single most important factor. For example, a flat-section wing can produce adequate amounts of lift all because of the Angle of Attack - the big difference is in the efficiency of the lift generation; flat wing sections carry a large penalty in terms of much higher drag, compared to an airfoil section where drag is substantially less.

Below is quite a good video about how airplanes fly and the aerodynamic forces:

For an airplane to fly in a controlled manner, control surfaces are necessary. The 4 main surfaces are ailerons, elevators, rudder and flaps as shown below: 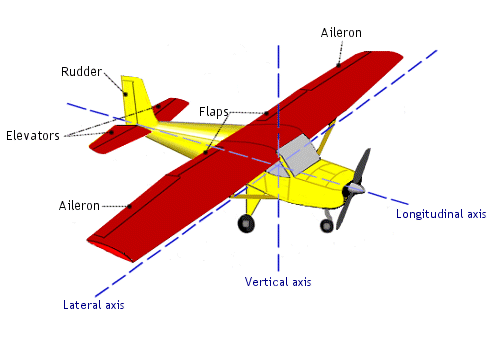 To understand how each works upon the airplane, imagine 3 lines (axis - the blue dashed lines in the picture above) running through the plane. One runs through the centre of the fuselage from nose to tail (longitudinal axis), one runs from side to side (lateral axis) and the other runs vertically (vertical axis). All 3 axis pass through the Centre of Gravity (CG), the airplane's crucial point of balance.

When the airplane is in forward flight it will rotate around each axis when movement to any control surface is made by the pilot. The table below shows the appropriate actions...

The following sections explain how each control surface effects the airplane. It's important to understand that all control surfaces work in the same way, in that they alter the camber (airfoil shape) of the complete flying surface. This, in turn, changes the forces acting on the surfaces and so that surface reacts in accordance with the change in force. The force in question is best known to us as lift, but this particular force occurs in any direction - not just upwards.

Located on the trailing edge (rear) of the wing, the ailerons control the airplane's roll about its longitudinal axis. Each aileron moves at the same time but in opposite directions i.e. when the left aileron moves up, the right aileron moves down and vice versa.
This movement causes a slight decrease in lift on the wingtip with the upward moving aileron, while the opposite wingtip experiences a slight increase in lift. Because of these subtle changes in lift the airplane is forced to roll in the appropriate direction i.e. when the pilot moves the stick left, the left aileron will rise and the airplane will roll left in response to the change in lift on each wing.
The ailerons are controlled by a left/right movement of the control stick, or 'yoke'.

The elevators are located on the rear half of the tailplane, or horizontal stabiliser. The job of the tailplane is to generate a downward force to counteract the natural nose-diving tendency of planes, which happens as a result of the natural forces that are generated about a plane's Centre of Gravity and Centre of Lift.

As the elevators are deflected up or down, so the amount of down force changes and this results in the airplane's nose pitching up or down; up elevator means more down force, so the plane pitches up, and vice versa.
However, pitching the nose up doesn't necessarily mean the plane will climb. In fact it's quite possible to be flying level, or even descending, with a nose-up attitude. Only when power is added and speed increased, will the plane climb with up elevator.

Elevators are the single most important control surface of a plane, and they effect the airplane's airspeed more than the need to climb or dive.

The rudder makes up the the rear portion of the vertical stabiliser, or fin, and is controlled by 2 pedals at the pilot's feet. When the pilot pushes the left pedal the rudder moves to the left, while depressing the right pedal deflects the rudder to the right.
The rudder works in the same way as ailerons and elevators, in that it changes the airflow over the fin.

Essentially, you can think of a fin as a vertical wing. The air flowing over the fin and rudder acts in exactly the same way as it does flowing over a wing and aileron - except the forces are horizontal and not vertical.

Deflecting the rudder to the left increases the air pressure on the left side of the fin and rudder, and so the whole back end of the plane is pushed across to the right, thus yawing the nose to the left.

Flaps are located on the trailing edge of each wing, usually between the fuselage and the ailerons, and extend downward (and often outward) from the wing when put into use. The purpose of the flaps is to generate more lift at slower airspeed, which enables the airplane to fly at a greatly reduced speed with a lower risk of stalling. When extended further flaps also generate more drag which slows the airplane down much faster than just reducing throttle.

Although the risk of stalling is always present, generally speaking an airplane has to be flying very slowly to stall when flaps are in use at, for example, 10 degrees deflection. Obviously though stall speeds and safe airspeeds vary from airplane to airplane.

So all these factors are why and how airplanes fly. Radio control (RC) planes can of course be more simple - for example, just have rudder and elevator control or perhaps just rudder and motor control. But the same fundamental principles always apply to all airplanes, regardless of size, shape and design.