- when it all goes horribly wrong!

Oops!! Maybe this isn't the best way to promote the hobby of rc airplanes and radio control flying, but sadly things do go wrong now and again and so it's only fair to dedicate a page of this website to the fallen.

Even though I have taken some flak, in the past, for putting this page up and publicising this aspect of the hobby, it's my true belief that newcomers to the hobby should be made aware of the risks. Why hide the fact that rc planes crash sometimes?

RC airplane crashes are all part of the hobby, and you need to write off a few planes now and again - it makes you a better rc pilot (so I've heard...).

So thanks to everyone who has shared their shame, and without further ado here are some 'nasty moments' from the world of rc flying...

This ME109 aerial display sequence comes from Orban Pyrotechnics & Models of Hungary.

This spectacular scene of destruction comes from Fremont Flyers of Fremont, New Hampshire.

Above 3 photos from North Down Model Aircraft Club, Northern Ireland.

Above 3 photos all from Bay City Flyers, Florida. 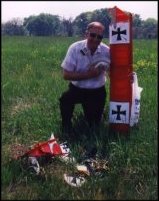 Above 3 photos from EMRC, Pennsylvania.

Above left from Plymouth Helis, Devon, UK. Above right two from EMRC.

Above: what you can do with the remains!

And here is a crash compilation video. It's not mine, but I did actually witness the very first crash on the vid, the large scale bipe. Horrible to watch it happen :-(

Why do RC airplanes crash?

There are several reasons why our beloved planes meet an untimely end.

The number one cause is pilot error; either the pilot is flying beyond his or her abilities, or flying a plane that's too advanced or simply unsuitable for his/her level of experience. Or perhaps they make a genuine mistake because of, say, disorientation - even experienced rc pilots make the wrong stick movements sometimes.

Equipment failure is another reason. In fact pilot error is commonly disguised as equipment failure!
Unwanted radio interference is a known killer of rc airplanes, but with the advent of 2.4GHz radio control systems this is becoming less common. Having said that, though, 2.4GHz radio control systems aren't as infallible as initially thought and you only need to browse internet forums to see that there are pilots out there who have lost aircraft because of problems with such systems. Thankfully, though, it doesn't happen too often.

Flying surface or control surface failure can also be the guilty culprit in bringing down our planes, especially if the builder did a less than satisfactory job on the hinges!

Yep, there are several different reasons why rc airplanes crash. Prevention is better than cure, but sadly it takes a crash to figure out what went wrong and hopefully prevent it happening again in the future. This hobby is all about learning from our mistakes, and sometimes we have to do it the hard way.

Some of the most spectacular rc airplane crashes happen in mid air, when one aircraft unintentionally (usually...) makes contact with another, particularly at high speed. This is almost always down to pilot error, and it's an easy mistake to make in crowded skies. You only need to fly once with one other plane in the sky to know how easy it is to misjudge, or not know, the position of the other plane.

When a mid-air does occur, it's usually common etiquette for both pilots to share the blame (unless some obvious evidence suggests otherwise!). The sharing of blame makes sense, since both pilots were generally in the same situation - flying and being aware (or unaware...) of other aircraft in the sky.

Anyone who has witnessed such an event will know the unmistakable noise of impact, immediately followed by complete silence as tiny pieces of shredded airplane fall gently to the ground.

One mid-air collision that I personally witnessed in my early aeromodelling days was particularly spectacular... Two planes met head-on, so you can imagine the result. While walking around the wreckage, one guy accidentally kicked what was left of the plane's shattered wing. The owner, as a natural reaction, cried out "Hey, don't break it!"

But laughs aside, understand this...

RC airplane crashes are all part of the hobby, there's absolutely no doubt about that. Any RC pilot who tells you that he/she hasn't crashed his/her airplane obviously hasn't been flying for long enough.

This page shows what can happen when things go wrong, and is written in a way that might appear to be making fun of the pilots involved. Not so! I've merely tried to take the sadness out of the experience.

I myself have crashed my fair share of rc airplanes, some of which had taken many hours to construct from a kit. I've flown with many rc pilots who have crashed their beloved, and often expensive, model planes. And although the moment of a serious crash is heartbreaking, one thing usually happens soon after the crash - the pilot smiles, even laughs and jokes about it! Maybe it's just his/her way of expressing the sudden grief of losing something so precious, but it happens.

So what's my point?... Don't get too upset if you crash your rc airplane. It happens. Be a man about it. Smile about it, even laugh and joke about it.

Yes, it's a great shame that your airplane has met an untimely departure, but pick up the pieces and move on. Look on the bright side - you can have an early beer, even get home in time for the big game. Not to mention the sympathy you'll get from your other half, when you do return home, plastic bag in hand and a tear in your eye...
In fact, milk it all the way. Phone home in advance and give the bad news. There'll be a cold beer in your hand as soon as you walk through the door.

And if you happen to witness an rc airplane doing something that the pilot didn't want it to do, here are some handy tips on how to react - a bit of 'rc airplane crash etiquette', if you like...

Saying the words "pilot error" is a definite no-no. Instead, just sympathetically nod your head in agreement with whatever the pilot blames. And if he blames himself (very rare), disagree with him completely and reassure him that the crash was caused by an outside influence completely beyond his control.
You'll be friends for life

But the most important point of all...

Don't let this page put you off radio control flying!