- a longterm love affair with aeromodellers!

Just why are rc warbirds so popular? It's an easy question to answer; the looks, charisma and characteristics of many classic fighter planes simply make them perfect radio control subjects, and warbirds always get attention on the flight line.

If you're unfamiliar with the word warbird, it's a general name given to full size planes that have seen operational military service.
It can be any aircraft that was produced to see action in any war, but the majority of rc warbirds are typically WWII (World War 2) fighters such as the North American P-51 Mustang, the Supermarine Spitfire, the Messerschmitt ME109, Focke Wulf FW-190 and the Vought Corsair F4U, for example.

Above: a lovely collection of various RC warbirds at a show.

Airplanes such as those named above have such a rich history attached to them, and although full size ones are now very rare, they have been immortalised in many ways - including the manufacture of rc warbirds!

There is a healthy selection of rc warbirds to choose from these days, and they can be bought in every form possible; kit, ARF, RTF, gas, electric... They range from simple 2-channel planes to giant scale ones that have taken months and months (even years) to build.

At the very top level, the serious aeromodellers build world competition-winning warbirds with amazing scale detail; some I have seen at various shows just look like a real plane has been magically shrunken down in size, such is the level of detail.

The following video shows some action from the Warbirds Over The Rockies meeting, a hugely popular event...

Are RC warbirds for beginners?

Generally speaking, warbirds fly faster and aren't quite as stable as high wing trainers; this combination means that if you try and fly a warbird with no prior radio control flying experience, you're likely going to get in to difficulties. It's far better to learn on a beginner plane, and then move on to a warbird as your second or third model, once you've got a few hours flying time under your hat.

Having said that, you can now buy more beginner-friendly warbirds such as the SAFE™ technology-equipped Corsair from HobbyZone

. This technology has been developed by Horizon Hobby, and effectively works to make learning to fly an rc airplane easier - even a warbird. 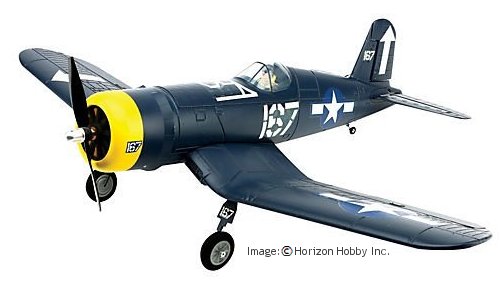 By all accounts it's a good little plane, but being a bit of a traditionalist I still think it's better to learn on a trainer, and move up to such a plane - with or without helpful technology!

For a larger "Ready To Fly" warbird, there is the glow powered Hanger 9 P-51 PTS 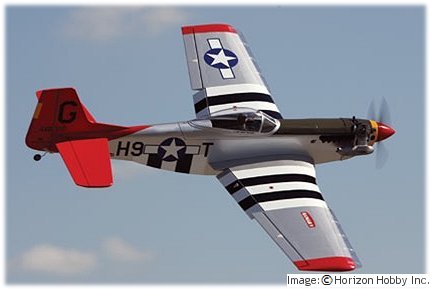 PTS stands for Progressive Trainer System and this particular rc warbird has been designed with the beginner in mind; it's been designed with certain features that make it capable of slower flying speed and more stable flight characteristics, just like a traditional rc trainer airplane.
The Hanger 9 PTS P-51 is a very good option if you're looking at getting in to IC powered rc airplanes, and want to start with a warbird. Don't be fooled though, this isn't an 'unpack and fly' rc airplane - you still need good and sensible instruction with such a model airplane.

RC airplane sound systems have been around for a long time, but mainly only for larger IC airplanes. This is generally because 4" diameter speakers are used in such systems, and so the systems are heavy and bulky.

Thankfully now there is a smaller and lighter sound system available for smaller foam (and also balsa) electric rc warbirds, featuring authentic engine noises such as the Merlin and Allison engines, as well as gun and cannon sounds.

You can learn more about this system at the MrRCSound website.

Flying rc warbirds is an exhilarating experience, and a great deal of fun. The majority of them have aileron control, which means smooth aerobatic performance is made possible as well as more definite directional control than having a rudder only. Traditional warbird maneuvers such as wingovers, low passes, victory rolls and of course those low straffing runs just look great when flown smoothly.

If you've got some experience in radio control flying and are looking for a characteristic and exciting rc airplane to try next, try a warbird!

My Art-Tech AT-6 Texan review.