- rise to the challenge of flying off water!

If you have access to a lake or wide and slow-flowing river, rc floatplanes and seaplanes can give you a more challenging and very rewarding radio control flying experience.

There aren't a huge number of Ready To Fly floatplanes widely available at the current time, but there are several options available. Notably, HobbyZone's ever-popular Super Cub can be fitted with a pair of floats, available from the same manufacturer.
The Super Cub makes a good beginner's rc floatplane, and it certainly looks good with floats attached...

The floats, pictured right, are made from tough and lightweight foam, with pre-bent wire struts that slot straight into the landing gear slots on the underside of the fuselage.

A larger prop is supplied with the float set; it's a fact of floatplane flying that more thrust is needed to overcome the extra weight and, especially, drag that the floats create - not only through the water but in the air as well.

An alternative configuration to the pontoon floats is the single hull aircraft, commonly called a seaplane or flying boat. These are larger than planes equipped with pontoon floats, and a very popular subject for radio control is the Consolidated PBY Catalina, pictured below. This particular example is the Great Planes ARF example:

The primary difference between rc floatplanes (& seaplanes) and land planes comes in the amount of drag they encounter.

On take off, rc land planes encounter very little drag when rolling along a smooth runway. But rc floatplanes encounter lots of drag as the floats try and cut their way through the water surface tension.
The amount of drag is relatively huge, until the floats start to ride on the surface of the water and the airplane 'planes' across the surface until it gets airborne. During the planing stage of the take off, the amount of drag is reduced significantly.
The same obviously goes for seaplanes. When the bulk of the hull is in the water there is excessive drag, which lessens considerably as the hull accelerates and eventually planes on the surface.

Like land planes, an rc floatplane should be taken off in to wind whenever possible. If there is significant chop on the surface, you might need to do your take off run parallel with the line of waves, and this probably means doing a crosswind take off.

The trick is to hold in more up elevator during the take off run than you would do when taking off from land; this holds the nose of the airplane up and helps prevent the floats from digging in to the water.
As the speed increases, you should be able to reduce up elevator slightly and let the plane ride the waves, so to speak. Once take off speed is reached, let the plane lift gently off the water with a small amount of up elevator, and maintain a smooth and gentle climb out from the lake. 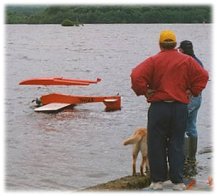 Landing an rc floatplane or seaplane on water isn't something you want to get wrong, unless you want to end up like this poor guy to the right.

The trick to landing your rc floatplane on water is to try and land parallel to any chop i.e. along the lines of the waves, and not perpendicular to them. This minimises the chance of a float digging in to a wave and the plane flipping over.
The downside to this is that it usually means landing crosswind, but that's not such a big difficulty because the chances are that the wind won't be too strong anyway; if it is, then you probably shouldn't have taken off in the first place!

Obviously if there is little or no chop on the water then you can land in to wind, if possible. Only a larger amount of chop needs to be taken into account when landing.

Above: you should try and land parallel to any wave troughs.

When landing an rc floatplane, you should come in as slowly as possible and flare as much as possible so that the floats touch the water as gently as possible. The plane should have a relatively high nose-up attitude.
Because of this, being aware of your rc airplane's stalling speed is very important; having your plane stall while on landing approach over water isn't much fun!..

Importantly, you need to get good at landing on dry land before you head for the lake. If your land-landings aren't yet as smooth and bounce-free as they could be, put in some more practice.
Another point to make is that it's a good idea to have some kind of plane-retrieval system in place, should your floatplane find itself stranded in the middle of the lake! A radio control boat is ideal for this purpose, or a friend with a real boat.

RC floatplanes and seaplanes are a lot of fun, and if you have easy access to a lake or good size pond then take advantage of it and have some fun! Wide rivers can of course also be used for float flying - indeed, any large expanse of calm water makes for a suitable floatplane and seaplane flying venue.
Just practice those landings on land and get them perfect before you attempt any water landings!

Below is a nice video of some rc floatplane action, just to 'wet' your appetite... ;-)