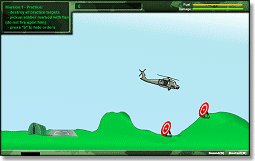 Your mission as helicopter pilot is to pick up the stranded and wounded special-op servicemen.
You have full access to rockets and bombs, and a good team on board... so go bring back your countrymen, and yourself, ALIVE!!
Controls: Use the Arrow keys to fly the helicopter
Z = Fire Rockets
X = Drop Bombs
Space Bar = lower the Winch Man.
Play game. Take control of a WWI warbird and shoot down the Hun! Get through the game and face the legendary Red Baron, that evil little Fokker!
Controls: Mouse movement for up, down, faster and slower
Left click for machine guns
Play game.

The aim of this game is to fly your plane through the air avoiding various obstacles, mainly hot air balloons. See how much distance you can cover before you do actually bump into any of these.
Controls: Keeping the left mouse button pressed down will make you go up while releasing it will make you descend.
Play game.

You are a pilot in charge of guarding your battleship from various air attacks, as well as protecting yourself from flying air 2 air missiles. Points are calculated by the number of enemy planes that you shoot down.
Controls: Use the keyboard arrow keys to control up, down, left and right.
Space Bar to shoot.
Play game.

The aim of the game is to keep on flying for as long as you can while collecting strategically placed red dots in your path. This game really test's your reflexes and your ability to think ahead, but beware - it speeds up quickly!
Controls: Use the left mouse button to gain altitude, release it to descend.
Play game.

The aim of the game is to just shoot 'em down as they come!
Controls: Keyboard arrow buttons for up/down, left/right and space bar to fire your gun.
Play game.

Try and land Daffy on the target - time his jump from the plane depending with the wind strength and direction.
Controls: Just click the appropriate button!
Play game.