How they've changed the hobby!

Without doubt electric rc airplanes (Electric Power or 'EP') have been responsible for bringing a huge number of people in to the radio control flying hobby in recent years, and it's easy to see why.

When I started creating this website back in 2002, Ready To Fly ('RTF') electric planes were only just becoming readily available and affordable. Just a few companies were mass-producing them, mostly from foam, and traditional builders probably saw them as a flash-in-the pan novelty!

But electric power had truly arrived and the relative low cost and convenience of EP bundled in to an all-in-one package proved irresistible to the beginner. At the time it was hard to imagine just how popular RTF EP planes would become, but with hindsight it's not at all surprising. Now, of course, it's mainstream throughout the hobby.

such as the now-famous HobbyZone Super Cub to become established products in the hobby.

, above left, and the Apprentice 15e

Incidentally, foam construction has become the industry standard material for electric RTF planes, although of course traditional balsa/ply model planes are widely available as kits and in ARF form, and to a lesser degree in RTF form.
Indeed it's fair to say that foam RTF EP rc airplanes (man that's a lot of abbreviations! ) have flooded the market since their introduction, forcing traditionally built planes to take a back seat.

The quality of such electric rc planes has improved dramatically to the point where mass-produced scale foam airplanes, like warbirds for example, are nearly as impressive as a scratch built one made by an experienced modeller over many months. And they can be bought for a much lesser cost, too.
The North American P-51 Mustang

is an example that's been modelled on a huge scale and is probably one of the most popular scale electric planes out there. Shown below is an example from E-flite, although this particular one isn't RTF. 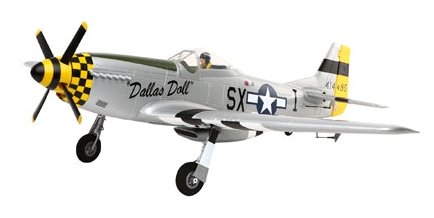 P-51's have to be the most popular warbird,
and perfect candidates for an rc airplane sound system.

It's a good reflection of how the top manufacturers have really raised their game, and brands like HobbyZone and E-flite (along with ParkZone) are big names in EP flight these days; HobbyZone being aimed at the complete beginner with their foamie range while E-flite target the more experienced flyer with a mix of foam and balsa electric aircraft.
Of course, there are numerous other great manufacturers churning out electric planes, such as Multiplex, Art-Tech, FreeWing and Great Planes to name a few.

EP planes from such brand names offer great value and have brought countless people in to the radio control flying hobby; people who probably wouldn't have bothered if IC power (internal combustion) was the only option.

The power of electric

In the very early days of EP (pre mass-production), electric rc airplanes were underpowered. Brushed motors and gearboxes were the order of the day, along with heavy nickel-cadmium batteries. It all made for a pretty poor powertrain setup, resulting in poor flight performance.

Thankfully those days are gone and EP planes are now at the point where they can match - even exceed - an IC powered plane in terms of flight times and performance. As a case in point, members of the UK RC Aerobatic Team have mostly swapped to electric power now!
Electric power in the radio control flying hobby has exceeded all expectations, there's no doubt about that.

Such is the popularity of electric power now, some manufacturers have even taken their most popular IC trainers and converted them to electric Ready To Fly planes.

Several favourite 4-channel RTF glow powered trainers became available as electric versions, two examples being the E-flite Alpha 450 and the HobbiCo NexStar Select EP, although both are now discontinued.
Both these planes had similar performance to their IC cousins.

Above: traditionally for IC power, these two trainers
were reborn with electric power.

But not only are manufacturers producing IC-equivalent electric planes, aeromodellers are converting IC planes themselves. 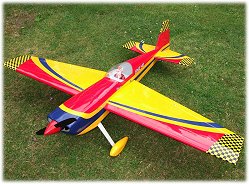 Pictured right is my own 60" span Edge 540 intended to take an IC engine, but I converted it to electric power. This kind of EP conversion is very commonplace now, and again it just goes to show how much the hobby has progressed in recent years. Roll the clock back just a few years and converting such a plane to realistic electric power would have been a real struggle, and very expensive.

Electric power has, as previously mentioned, transformed this hobby and the ongoing electronic revolution has resulted in smaller and smaller rc planes being produced.

Generally speaking, bigger is better when learning to fly rc (up to a point...) but today's micro rc planes have made a huge impact on the hobby.
One of the most popular planes for learning on has been the HobbyZone Champ

which has sold in its thousands. The Champ, pictured right, is a 3-channel plane with just a 16 inch wingspan. Although now a bit dated, in terms of micro rc planes, it still continues to sell well and introduce new flyers to the hobby.
If your budget is tight and your flying space limited in size, it's certainly one to consider! 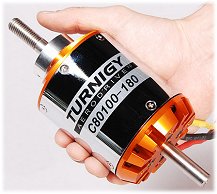 At the other end of the scale, electric motors can be bought large enough to power huge scale rc planes, so there really is no limit to what can be achieved with electric power in the rc flying hobby these days.
Imagine how big the plane needs to be to use an electric motor like this one shown!

Points to note when choosing an electric RC plane

With so many EP planes available nowadays, choosing a suitable model does need some consideration.

Fortunately the process of selecting the right plane for your needs can be kept simple so long as you keep a few basic guidelines in mind. Many RTF electric planes are designed for the beginner, but there are also many that are not.

Here are a few of those thoughts that you should remember when choosing and buying your first electric rc plane:

The above pointers only scratch the surface, but my e-book The Beginner's Guide To Flying RC Airplanes will answer all the questions you have about getting started in radio control flying with an electric plane.

Well hopefully this page has introduced you to EP within the hobby. Learning to fly an electric rc plane is a fun and exhilarating experience but you do need to simplify the game as much as possible in your early days.
Keeping the above points in mind should help you do that, and once you've got a few hours flying under your hat and built up some confidence then you can consider moving on to larger and faster planes.

My Beginner's Guide To Flying RC Airplanes e-book will take you step-by-step all the way!

How to fly rc planes.

The Watts per pound rule.