The Watts Per Pound rule

More of a 'rule of thumb' than a hard and fast rule, the Watts per pound rule is one that lets you determine the power output needed for your electric rc airplane, to give it the performance that you desire.

The rule relates to how many Watts (W) of power are needed per pound (lb) of airplane, and the approximate values range from 50W to 200+W.
It's generally accepted that any plane with less than 50W/lb is going to struggle unless it has a very low wing loading. At the other end of the scale, a powertrain setup that's delivering 200 W/lb (or more) is going to mean you have pretty much unlimited ballistic performance!

Here are some Watts per pound values that should put you in the right ballpark for your particular plane...

By working around those categories you should be able to decide how much power your rc airplane needs to perform well, but it has to be said that those values aren't set in stone. They are very good starting points though.

At the end of the day it all comes down to experimentation as far as actual performance goes; once you've decided on a suitable motor that is capable of delivering the required wattage, then play around with propeller selection; increasing/decreasing prop diameter and pitch will have a big effect on how your airplane flies, but be careful to stay within the recommended range as stated by the motor manufacturer.
Over-propping an electric rc airplane is one sure way to burn out the ESC because the motor is forced to work harder than it's designed for, and so it tries to draw more current than you calculated the ESC to handle.

Incidentally, a Watt is the correct unit to measure electrical power and Watts are calculated by multiplying the voltage (V) by current in amps, for which the proper symbol is 'I' but you'll also likely see it written as 'A'.
So, VxI=W or VxA=W.
If you're looking for the IC (internal combustion) equivalent, 1hp (horsepower) is equal to 746W.

This useful little tool (actually essential if you do want to start experimenting with different EP setups) connects between the flight pack and ESC, and will give you various readings throughout the power range.
Simply connect it up and power up your plane, and read off how many Watts are being produced. 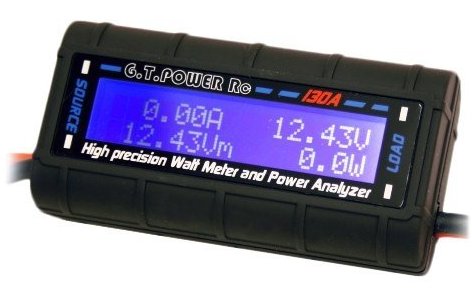 Above: an RC Watt meter is essential once you get in to
doing your own electric power setups.

It's worth noting that although the Watts per pound rule works on the actual flying weight of the airplane, the more realistic and accurate reference to a plane's performance in relation to its flying weight is called the wing loading.

Wing loading is a value expressed (for model planes) in ounces per square foot (Oz/ft²) or grams per square decimeter (g/dm²), and is the flying weight of the plane divided by the total wing area. The larger the wing area and lighter the plane, then the lower the wing loading will be and vice versa.

A lower wing loading means slower take off capability and better flying performance in many ways. But for the purpose of calculating power requirements for your model, in terms of the Watts per pound rule, work with the actual weight of it and don't worry about wing area or loading.

If you're a complete beginner to the hobby with your first RTF rc plane, then you won't need to worry about Watts per pound or wing loadings just yet. But as you get more in to the hobby, do take the time to understand and know how to use these important calculations.