RC drone registration for the UK

- why DMARES hit the hobby.

Since the advent of multicopters in the hobby, there have been mixed opinions on this type of aircraft. Quadcopters, the original name for a 4-bladed multicopter, were a massive hit when they first started appearing in the shops, and there's no question that they were popular with many people. 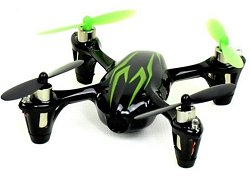 Such aircraft were surprisingly easy to fly, thanks to the incredible flight-stabilisation technology they use. The small ones were cheap to buy, and they could be bought not only from specialist model shops, but also many toy shops. They could be bought in a variety of sizes, from micro ones that sat comfortably on the palm of your hand, to bigger ones equipped with cameras. Heck, even some micro ones had a camera fitted!

But with time multicopters (not just 4 but also 6 and 8-bladed 'copters) began to get some bad publicity around the world. The ease of which they could be purchased and flown meant practically anyone could do it, and this included people who didn't always recognise the need to fly responsibly. Multicopters fitted with cameras were used to spy on neighbours, or used to take video footage of public events, where such model aircraft weren't permitted to fly (eg too close to a public crowd).

As the media shared some stories, these multicopters got branded with the name drone and this name has stuck; manufacturers have since adopted it and it's now a commonplace and instantly recognisable name in the radio control flying hobby. Thanks to the publicity, and wide availability, even those who aren't remotely interested in model flying know what a drone is!

Now, it must be stated here that there are plenty of sensible, responsible rc drone operators out there. But there are still very mixed feelings about this newest type of rc aircraft.

My personal view, if you're wondering, is that I don't like them. I have owned one, but didn't fly it much. Despite me disliking drones, I do see their commercial benefit for aerial filming - there's no argument that they are a very cost-effective way of getting video footage or still images from above.
I think they are going to play a bigger part in our lives in the future, as technology advances, to the point that one day we might be taking drone taxi rides across town!

But back to today's rc drones, I just don't like them. I can see the attraction of drone FPV (First Person View) racing; indeed, drone racing popularity is such that there is now a global Drone Racing League, I've watched it on television several times. But, generally speaking, I'm not a drone fan.

Here in the UK rc drones have been in and out of the news, in the relatively short time they've been around. But it was in December 2018 that they really hit the headlines.

As a precautionary measure, around 1000 flights were delayed or cancelled, and this severe disruption effected around 140,000 passengers! Many of whom were looking forward to getting away or visiting relatives over the Christmas period.

This became a serious incident and police couldn't decide whether it was terrorist related with the intent of bringing down an airliner, deliberate disruption to cause total chaos, or just irresponsible drone operators who didn't know any better.

An unfortunate couple were arrested and detained by police, but later were released without charge. Sussex Police later issued an apology to the couple.

So who was responsible for ruining so many people's 2018 Christmas? Despite cutting edge anti-drone technology being employed by the police and army, nobody was ever caught and the drones were never found. Airport operations returned to normal, and the story sank from the news. So I guess we'll never know (although I have a sneeky feeling the police might actually know...)

Anyway, that, to date, has been the most horrendous rc drone story and it's this story that led to some new drone registration being rushed through Parliament here in the UK. Well, the Gatwick incident isn't totally responsible - legislation was already being drawn up to cover the use of drones in the UK, the Gatwick incident just hurried things along.

Model flyers getting caught up

Radio control flying has been around for a good few decades now. The first rc plane flew in the late 1930s, but it's probably fair to say that it's been a mainstream hobby since the 1960s when better technology helped the hobby.

Overall, the hobby enjoys a good safety record. Here in the UK the British Model Flying Association oversees all model flying, and provides the necessary Third Party Insurance for its members. BMFA members, of which I am one, tend to be sensible, responsible model flyers. We know the rules and abide by them, generally speaking!

But, sadly, when all the drone misery hit the news we all got tarred with the same brush. All model aircraft got seen as drones, and the new legislation put us all under the same umbrella as the Gatwick idiots. Needless to say, the idea of us all being seen as irresponsible flyers ruffled a lot of feathers in the rc flying community.

Initially, prior to the by now infamous Gatwick incident, the CAA had been working closely with the BMFA, in order to make the registration and legislation have as little affect on us mortal model flyers as possible. But once Gatwick had happened, the Civil Aviation Authority (the governing body for all flying in the UK) tried to steamroll the new legislation through, without paying much attention to the historically safe record of model flying, or the opinions of the BMFA and its members. Of course, misinformation was rife amongst the rc community and the CAA's initial news about the drone registration told us that a fee of £16 would have to be paid to cover the cost of running the new scheme. Talk of new competency tests and flying site restrictions was both rife and unsettling, as speculation mounted.

The BMFA worked tirelessly for many months on its members behalf, and indeed on behalf of the future of model flying in the UK. The CAA was eventually forced to sit round the table with the BMFA and some agreeable (to the BMFA) concessions were written in to the new legislation and registration scheme. The cost of registration with the CAA dropped from the predicted £16 per person to a more acceptable £9 (paid on top of the usual annual BMFA membership fee.

Drone and Model Aircraft Registration and Education Scheme - the reality

So then, after many many months of hearsay, and banging heads against brick walls, the Drone and Model Aircraft Registration and Education Scheme (DMARES) was implemented here in the UK.

The upshot of all this bureaucracy is that I, and the other 36,000 or so BMFA members, have to register with the CAA and pay our £9 registration fee. No biggie, considering how it could have ended up. Our friends in Canada, for example, are getting a much bumpier ride and really raw deal. And in the US things are no better, as in many European countries too. Overall I think us Brits got a fairly positive outcome.

Registering with the CAA can be done through their website ( https://register-drones.caa.co.uk/ ) or via the BMFA membership portal ( https://bmfa.azolve.com/. There is an online competency test to take, which asks you 10 questions based on the current model flying rules and regulations. The questions aren't difficult and pure common sense will reward you with the right answers. 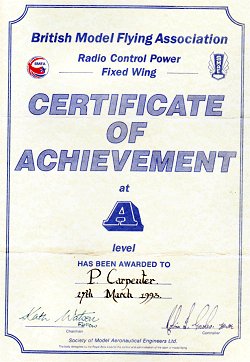 If you already hold a certificate from the BMFA Achievement Scheme, eg an A, B or C certificate, then you don't need to take the test. The certificate alone proves your competence (as intended!), and this is one of the positive outcomes brought about by the tireless work of the BMFA with the CAA.

I do hold an 'A' certificate (pictured right) but I decided to take the test anyway, and I scored a smug-inducing 10 out of 10. On successful completion of the test, you are awarded a Certificate of Competency. 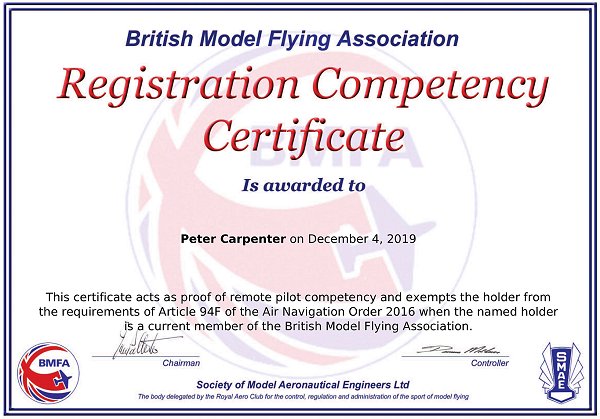 On completion and paying the registration fee a registration number is issued to the flyer, and this number must be displayed on each model aircraft the flyer owns. Initially this was to be displayed on the outside of each aircraft in a prominent position but, again thanks to the BMFA's hard work, the CAA agreed to the number being placed in an "easily accessible" position, such as beneath a battery hatch. A collective sigh of relief was breathed by the scale community on hearing this news!

So, there you have some info on the long awaited Drone and Model Aircraft Registration and Education Scheme. Not nearly as messy as it could have been, but it's certainly not been an easy ride for the British Model Flying Association's Dave Phipps (CEO). I hope now, at least, Dave is getting some more sleep!

It goes without saying that this new legislation won't stop the idiots who do want to fly their drones in a completely irresponsible and reckless manner. These flyers simply won't bother registering, and it's highly unlikely they'll even be aware of the new rules. Or even any old ones, for that manner.

I personally think it's only a matter of time before a drone is responsible for something a lot worse than what happened at Gatwick, and you can be darn sure the operator won't be registered.

If you're a sensible and responsible model flyer, like most of us are, do check for any new legal requirements for registration. Below are some links to the main model flying governing bodies of the world...

AMA drone registration info (for the US).