The massive influx of micro-size electric rc airplanes, helicopters and drones over the years has given rise to indoor flying meetings being held more often and in a wider variety of venues than ever before.

My personal love of flying model planes involved many indoor flying meets when I was younger, but never radio control at that time. In fact, indoor rc airplanes just weren't around and the aircraft being built and flown were mainly rubber or CO2 powered free flight ones.

Such planes are still popular and have their dedicated aeromodelling followers, but these days micro electric Ready To Fly radio control aircraft have become so widely available that indoor flying has become more rc oriented than free flight.

Planes like the ParkZone Night Vapor and Ember 2 really kicked off the trend, and these two slow-flying examples are perfect RTFs for flying around the limited airspace of school halls, gymnasiums, aircraft hangers and other similar spaces where regular indoor flying meets are held. 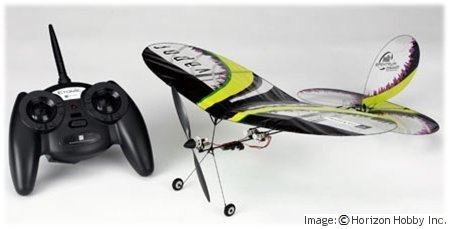 Above: the ParkZone Vapor is a
perfect indoor rc airplane.

Once this rc micro technology was developed and available, the floodgates opened and more and more micro rc planes have appeared. Horizon Hobby's range of so-named Ultra Micro (UMX) planes have become hugely popular, although to be fair not all of them are suited to indoor flying venues; some are just too fast and need to be flown outdoors on calm days. But, of course, if the indoor venue is big enough then anything can be flown indoors!

Above: just a few examples of the 'Ultra Micro' planes that
have taken indoor flying to a new level.

Of course, rc airplanes like these haven't completely taken over the gymnasium. Indoor flying meets will always include the smaller free flight planes; indeed, many indoor enthusiasts shun the new breed of micro radio control aircraft and I know of more than one monthly meet that won't let an rc airplane or helicopter through the door!

have also become very popular, and the choice of such aircraft available now is quite staggering.

Coaxial rc helicopters in particular have introduced many people to the joys of rc flying indoors - not only in the typical venues, but at home as well.

Above: micro helis & drones,
both perfect for indoor flying.

Traditionally indoor flying meetings take place during the winter months when the weather isn't so good for outdoor flying. Below is a short video to show a typical rc indoor meeting...

Whatever your taste in model aircraft, indoor flying is there to be tried! Nowadays, the array of rc aircraft capable of being flown indoors is vast and ever-growing. Whether you're into airplanes, helicopters, drones or even blimps, there's an aircraft out there to suit your needs.
And if you like the sound of a free flight rubber or CO2 powered plane, then why not try that too? Balsa kits for such airplanes are very cheap, although you'll need a certain level of model building experience - they're most certainly not RTF! 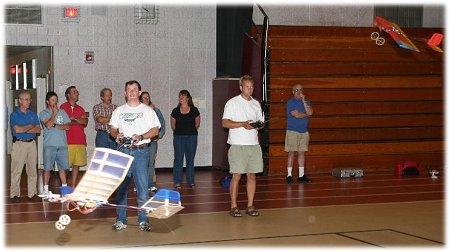