Playing rc airplane games with your fellow fliers is a good, fun activity to undertake at the flying field; not only are they great fun, but the games will improve your flying skills no end!

There are several games you can play, this page shows you the popular ones. If there's a crowd of you at the flying field you can make these games in to a friendly competition, even maybe offer some prizes to boost the fun.

The rc airplane games shown here are Limbo Flying, Spot Landing, Follow the Leader (or 'Pursuit') and Burst the Balloon. All 4 games need a few extras to get set up with, but the games are pretty self-explanatory.
Here are the basic guidelines for those 4 rc airplane games...

This limbo flying game involves setting up a limbo bar, under which you attempt a low-level pass. It's a fairly basic set-up but try and use lightweight plastic or bamboo canes for the frame - metal ones will do damage to an off-target airplane! If you do have to use metal bars, consider wrapping them in foam - water pipe insulation available from hardware/plumbing stores makes ideal padding.
The alternative option to a solid bar is a piece of cord strung between the uprights, but this can be harder for the pilot to see.

Don't make the bar too low to begin with, and keep it as wide as possible. As you get better at flying underneath the bar, lower it but keep the width constant - unless you're feeling really confident! 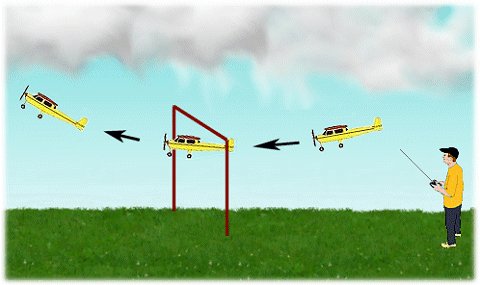 This spot landing game is a true test of skill!
Using a brightly coloured tape or ribbon, lay out three concentric circles within your usual landing area. Make the outer circle fairly large, say 10ft. in diameter, then lay out the other two within this one, say at 6ft. and 3ft. diameters. This 'follow the leader' rc airplane game, also called Pursuit, takes at least two rc airplanes; the more the merrier, but too many gets a bit hectic!

Tie a good length (say, 20ft.) of a crepe-paper type material to the rear end of one of the airplanes. Yep, you guessed it, this is the leader.
Let the leader take off safely, then the other pilots have to fly their planes after the leader, trying to cut the streamer with their propellers. This isn't as easy as it might sound but if you're that good and you catch the streamer regularly, don't let it get too short. Let the leader plane land and replace it with another long length. Take it in turns to be the leader, so each pilot gets to fly both leader and chaser. This is just a variation on the above game, but balloons are tied to the leader plane instead of ribbon. As with 'Follow the Leader', let the lead airplane take off and have the other planes chase it around the sky, trying to burst the balloons with their props. A variation on this game is to fill balloons with helium (widely available from party stores) and tether the balloons to the ground on long lengths of string; let the balloons float and try and burst them with your plane.

So there you have four simple but fun rc airplane games with which to hone your skills. If you're playing these in a public area, remember where you are! Don't become so absorbed with playing the games that you forget about safety issues.

Always fly safely, but have fun!

Practicing to fly rc plane games can be done safely on an rc flight simulator, and the RealFlight is one of the best available (shopping options below...)