Traditional balsa model airplane kits are still widely available but sales of them have taken a knock in recent years, thanks to the influx and wide availability of good quality pre-built rc planes.

Indeed, it's these Ready To Fly (RTF) and Almost Ready To Fly (ARF) planes that have been blamed for the decline in traditional aeromodelling, but in more recent times there seems to be evidence that kits are making a comeback. Perhaps this is due, in part, to those RTF and ARF owners now being involved in the hobby long enough to want to build their own plane, rather than buy just another stock mass-produced one?

What's in the box?

A traditional model airplane kit typically comprises the plan and building instructions, all the balsa and ply wood needed to construct the airplane and most, if not all, of the hardware needed such as servo linkages, control horns, undercarriage parts, motor mount, fuel tank etc.
Essentially, the kit will contain all you need to complete the airframe, leaving you to buy the covering material, radio gear and engine/motor and associated accessories. Some kits do include a covering material (typically an iron-on plastic film) but this isn't usually the case. 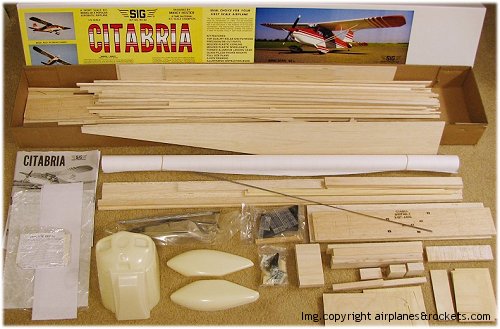 Above: a typical model airplane kit will contain all you need
to build the complete airframe.

The components of the plane such as wing ribs and fuselage formers may already be cut out either by CNC machine or, more commonly these days, laser. If the parts are not pre-cut then the outline of each one will be printed on to sheet wood and it's your task to accurately cut them out with a sharp modelling knife. Certainly CNC/laser-cut kits are the nicer option!
Strip balsa will also be included in the kit for use as wing spars, leading and trailing edges, fuselage longerons etc.

Incidentally, despite its often soft feel, balsa is actually a hardwood and is ideally suited to model airplane kit construction because of its excellent strength to weight ratio. Thin model-grade plywood is also commonly used in certain areas of a model airplane construction, where more strength is required such as engine bulkheads (firewalls) and landing gear plates. 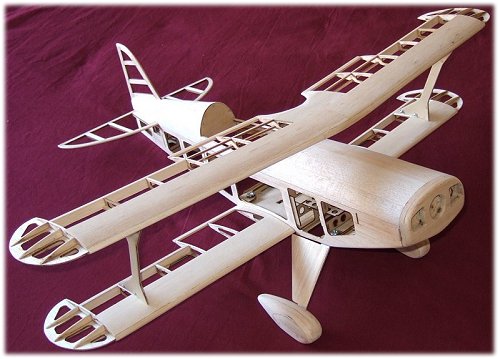 Above: a laser-cut balsa and ply kit, my Jamara Pitts S2B.

Model airplane kit construction takes place over the plan which must be laid out on a flat modelling board.

Typically the balsa components are held in place with pins until the glue sets, so the board needs to be soft enough that a pin can be pushed into it. Sheets of two or three inch thick insulating foam used in the construction industry make ideal modelling boards, as do boards made from end-grain balsa blocks laminated together. An alternative is to have a flat steel sheet and use powerful Rare Earth magnets to hold the parts in place, instead of pins.
Whatever is used for the board, the key issue is that it needs to be perfectly flat. Any humps or twists in the board get transferred to the plane during construction, and that's not good. 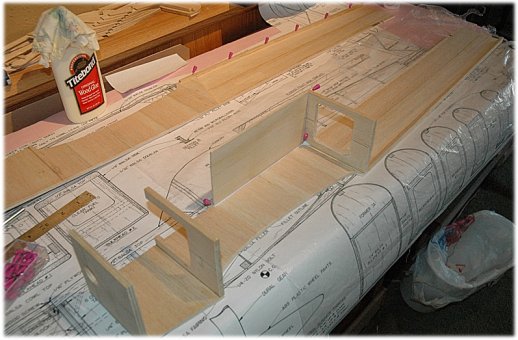 Above: A CAP 21 fuselage takes shape over the plan.

Different glues are used when building model airplane kits and the type of glue depends on the joint and the wood type/hardness, as well as the builder's personal preference. White wood glue (PVA), aliphatic resins and cyanoacrylate (CA) glues are commonly used on balsa to balsa joints, but where stronger joints are needed such as landing gear plates and engine bulkheads then two-part epoxy resin is common.

On a laser-cut kit, such as the Pitts shown above, it's normal to interlock the tight-fitting pieces together dry, and then 'wick' thin CA glue into the joint of the two pieces. 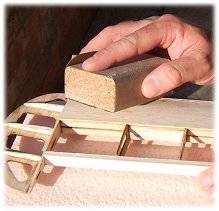 Once all parts of the plane (wing, fuselage, tail etc...) have been built then the wood needs to be carefully sanded to a smooth finish, particularly the joints. Any unwanted holes and other imperfections can be filled with lightweight filler and then sanded to shape.
For many, including myself, sanding is the worst job of all but it's worth taking the time because any lumps and bumps in the airframe will show through the covering and potentially spoil the look of the finished plane. So despite being a nasty task, it's worth taking your time with the sanding and getting a nice finish. Use fine-grade sand papers such as 400, 600 and 800 grit for example.
Always wear some kind of protective mask when sanding; balsa dust is very fine and easily inhaled, which isn't particularly good for you!

When the construction and final sanding of the airplane parts is complete, the parts are then covered in some kind of covering film, a common choice being a heat sensitive film which is applied using an iron.
The heat melts the adhesive backing which sticks the film to the balsa, then the iron or a heat gun is used to shrink the film over the plane parts.

There's a definite skill to using such coverings and the manufacturer instructions regarding iron temperature settings should be followed carefully; if in doubt, practice on some spare balsa first!
The following video will introduce you to such covering methods if you're new to them. This rc airplane covering video is the first of a series, you can find the rest on YouTube. 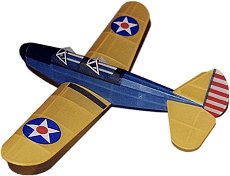 Heat-shrink covering is a relatively modern invention and traditionally balsa model airplanes were (and still are in some cases) covered in lightweight tissue paper (or even silk) with a liquid called 'dope' applied to the airframe to stick the tissue. Dope is then applied to the entire covered surface and as the dope dries it shrinks, tightening the tissue as it does so.
Many builders of small scale model airplanes, such as rubber-powered ones, still use this method but these days ultra lightweight iron-on coverings are available to replace the tissue and dope method, should you prefer.

If you want a gentle introduction to traditional model airplane building techniques then an ARF (or ARTF) - Almost Ready To Fly - kit might be the answer.

ARFs are 90% finished, including the covering, and they are mostly of balsa and ply construction. All you need to do is some final assembly work (fitting hardware) and install the engine/motor and radio gear yourself. The photo below shows a typical ARF kit, fresh out the box: 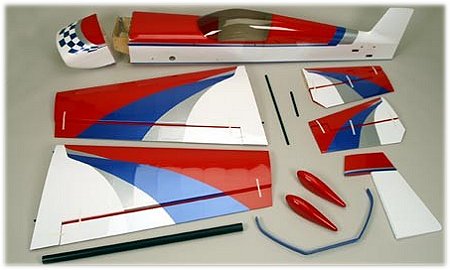 ARF airplane kits have become very popular in recent years and there are some excellent quality kits out there - and some very bad ones too!
The majority of such kits (good and bad) come from the Far East; if you're going to buy an ARF then do some thorough research before you buy - internet forums such as RC Groups, RC Universe and Model Flying (UK) are invaluable places for finding out about a certain kit.

The influx of high quality ARF rc airplanes in to the hobby in recent years has been largely blamed for the demise in traditional kit building by aeromodellers, but ARF planes are an excellent solution to those modellers who want to fly a traditionally built balsa/ply plane but just don't have the time to build one themselves.
Read more about ARF rc airplanes.

Although there is a very wide selection of traditional balsa model airplane kits available, and an even wider selection of ARF ones, nowadays however it's quite normal for model rc planes to be constructed from foam. Most electric powered RTF (Ready to Fly) rc airplanes are made this way and in the last few years there has been a huge surge in the number and variety of foam planes available. 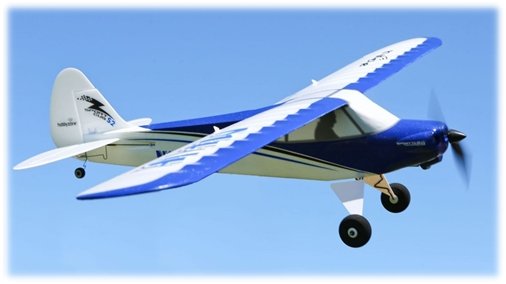 Above: RC airplanes of foam construction are commonplace,
particularly in the beginners sector.

Foam rc planes are very convenient and are cheaper to buy than balsa ones, simply because manufacturing costs are lower. The type of foam typically used in model airplane construction is very durable and so the plane can withstand bumps and knocks greater than a balsa/ply airplane can. For these reasons foam rc airplanes are very popular as beginner rc airplanes.

The downside to 'foamies' is that because foam is a relatively soft material, it's easily damaged by careless handling. The so-called hanger rash is a common issue with foam planes!

Not all RTFs are foam, or electric. There are traditionally constructed glow plug powered ones out there too, for example the Alpha Trainer DSM2 and NexStar Select 46 both shown below:

Model rc airplanes like these let the beginner own and fly a brand new, traditionally constructed balsa rc airplane without having to build it.
Admittedly the range of traditionally built balsa/ply IC (internal combustion) rc airplanes is very limited, but they are available if you shop around. 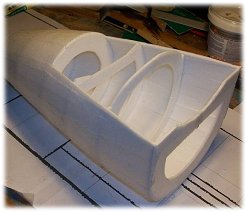 Although balsa wood has long been the main material used in model airplane kit construction, there is a growing number of aeromodellers who are using Depron foam.

Originally manufactured for floor insulation for the construction industry, the qualities of Depron were soon noticed by aeromodellers who quickly discovered its suitability for model plane construction.
The rigidity and ultra light weight of this foam sheet make it an ideal substitute for balsa and some incredible planes have been made with it. The pic below (img© from the Model Flying forum) shows the fuselage of a 134" span Lancaster being constructed from Depron!... 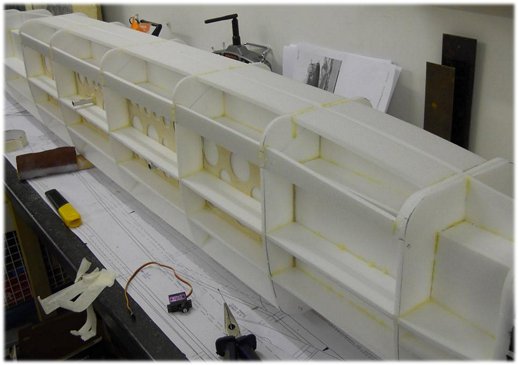 It's amazing to see that such a thin foam can be used to construct such a large-scale rc plane. Of course, balsa and/or ply reinforcements are necessary in places but it just goes to show what can be done with Depron.

Various modelling tools and accessories are needed to construct a model airplane from a kit, a typical list would include....

As mentioned earlier a modelling board is also essential, this needs to be something rigid and completely flat so that the plane will be straight and true.
You can also buy what's known as a modelling jig, on which to build your plane. Personally I've never used one, although I do have one at the back of the cupboard!

Your local hobby shop, or stores online, will carry all the tools and accessories you need to build a plane from a kit.

Building a model rc airplane from a kit is a truly rewarding thing to do. I can personally recommend doing it, the feeling of self-satisfaction at the end of the job is enormous.
But it's not something that can be rushed. It's a very involved process that will take you time.

If you're looking for a project to undertake during the long winter months (traditionally that's when aeromodellers build their planes), then consider building your next model plane instead of rushing out and buying one that's already made. You won't regret it!

There's a multitude of places selling kits out there but here are a few of those seller's products on Amazon...