With radio control flying, the most essential rc airplane accessories are the field equipment items, simply because without them you won't get airborne!

IC (internal combustion) powered rc airplanes require more accessories than electric powered planes, purely because of the engine and the need to start it.
IC planes almost always justify the purchase of a flight box, or 'tote', because of the amount of accessories that you need at the field, whereas with an electric powered plane you can get away with just a small box of bits, or even nothing at all if you're flying close to home.

Field equipment rc airplane accessories are rarely very expensive and, in your early learning days, can even be borrowed from fellow flyers if you're flying at a club patch. But once you're at a stage where you can confidently fly your airplane alone at the field, then stocking up with your own set of essential accessories is a must, so you won't have to rely on anyone being at the field.

The most important item you must have for an EP plane is a good charger.
With RTF electric rc airplanes, it's unusual for a battery charger not to be supplied in the box. But if one isn't, or you want a better one than the one supplied, a good quality field charger

is the best option.

Field chargers have a 12V input as well as, or instead of, the main 110/220V input. Therefore you can charge your airplane battery pack from your car battery, either by using 'crocodile clips' directly to the battery or via the car cigarette lighter outlet. This lets you operate the charger at your flying site - hence the name 'field' charger.

Not every EP plane flyer uses a field charger, though - myself included. If you have enough battery packs to last the session then you can charge them all at home beforehand and go flying armed with a handful of fully charged packs. This obviously negates the need to charge them at the field!

On that note, buying two or three spare flight packs

for your plane is highly recommended. Typically a flight won't last more than ten minutes at most, and most packs take an hour or so to charge - probably longer with a field charger on a 12V supply. So stock up with flight packs, and you won't be twiddling your thumbs between flights.
Also, a battery checker

is a must, especially if your charger doesn't have a digital display. Such a checker will tell you the charge state of your flight pack.

Other electric rc airplane accessories you might need are going to depend on the plane you have, but the list rarely goes beyond a few basic hand tools such as screwdrivers, a spare propeller or two, maybe large rubber bands, CA glue, sticky & double-sided tape etc.
The photo below shows some items from a very simple EP field box... 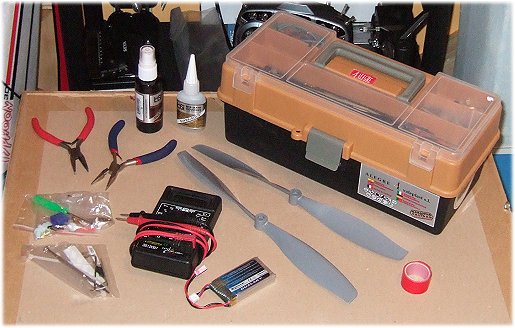 As already mentioned, IC powered rc airplanes require much more in the way of field equipment. This is due to the presence of the engine, and certain accessories are obviously needed to make the engine run. They are, in no particular order...

A glow plug igniter is necessary to initially heat up the filament of the glow plug, so that the fuel/air mixture inside the combustion chamber of the engine can be ignited. Once running, the igniter is removed and the heat within the engine, along with a catalytic reaction, keeps the plug glowing. Glow plug igniters are 1.5V and should be charged before each flying session. A flat igniter won't heat up a plug!

A glow plug wrench is definitely an essential IC rc airplane accessory. Glow plugs have a habit of burning out and do need to be replaced periodically. Without a wrench you're not going to be able to remove the glow plug from the engine cylinder head, and replace it with a new one.

Spare glow plugs are necessary for when the one in the engine fails on you, which it will sooner or later. A broken down glow plug is about the biggest cause of non-starting glow engines, and it takes just a few seconds to change a plug - so long as you didn't forget your glow plug wrench! Learn more about glow plugs for rc planes.

Fuel is, needless to say, essential! Choosing a good quality air fuel is important - lesser quality fuels can have an adverse effect on your engine performance. Follow manufacturer guidelines for selecting an appropriate fuel for your engine, both oil content and nitromethane content can vary depending on performance requirements. Learn more about glow fuel for rc airplanes.

A fuel pump can either be mechanical or electrical. A mechanical one is obviously cheaper and just as effective. Flight boxes equipped with a 12V battery and a 'power panel' will often have a pump integrated into the panel. Along with a pump, a small plastic squeezy fuel bottle with a fine nozzle is also a good idea, in case you need to inject fuel directly into the carburettor if you're having problems priming the engine.

An electric starter is essentially a glorified 12V motor that's used to turn over your airplane's engine. A rubber end piece fits onto the motor shaft of the starter and pushes against the spinner or propeller. When the starter is operated, the airplane engine gets turned over very quickly, hopefully firing it in to life.

A 'chicken stick', or start stick, is a wooden or plastic stick with a thick rubber coating on one end. The chicken stick is used to manually flick over the propeller, thus protecting your finger against injury. Alternatively you can buy a thick rubber sleeve that you put over your finger. Either way, if you opt to start your engine manually instead of with an electric starter, the chicken stick or sleeve is one rc airplane accessory that you don't want to leave off the list!

Other non-essential but desirable rc airplane accessories to take with you each flying session include spare props and a selection of tools such as screwdrivers, wrenches and pliers - all suited to the size of the nuts, bolts and screws that are found on your airplane.

Some kind of fuel cleaner is also a very good idea - your airplane will get oily during a good flying session and cleaning it properly afterwards is very important.

As you gather more and more accessories (it's inevitable!) you'll need a field box

(also called a flight box or tote) to carry them all in. Field boxes are simply the best way to carry everything together and most boxes, such as the Hanger 9 flight box shown below, are designed to take a 12V power panel.
Your field box should be sturdy and fuel proof, with plenty of storage. Separate compartments and perhaps one or more drawers are good design features of a field box. 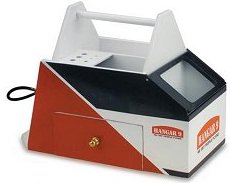 is the central unit for handling all things electric, such as starters and remote fuel pumps.

Most power panels actually have an integrated fuel pump with fill and syphon controls. They require a 12V battery to operate - you can buy batteries made especially for the hobby, such as the Hanger 9 12V 7Ah sealed battery

or you can use a standard 12V car or motorbike battery.

The power panel shown below is the Hanger 9 Deluxe power panel, and is fairly typical of all rc airplane power panels. It's important to note though, if you don't intend getting a field box then make sure you buy a free standing panel and not one that's specifically been designed to be built into a field box. 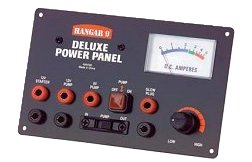 Buying an assortment of rc airplane accessories is all part of radio control flying and, as you've seen, glow plug rc airplanes require much more items than electric planes do. All the essential field equipment items have been shown on this page, but as you get more involved with the hobby, so your accessories are bound to increase!