A certain number of radio frequencies have been designated by law for use with rc airplanes and aircraft being controlled with an FM MHz rc system (i.e. not 2.4GHz). They fall into the 72MHz band and each separate frequency has been given a unique channel number.

RC aircraft (or any rc vehicle) operating with a MHz radio, in close proximity to one another, cannot do so on the same frequency because the radio signals being emitted from one transmitter will interfere with the signals from the other transmitter. If this happens, the receiver in the model won't know which signals to respond to.
This almost always results in the model going out of control, and the inevitable crash soon follows.

For this reason, it's very important that you check to see whether anyone else is flying an rc airplane nearby before you switch on your MHz transmitter, and if so, which frequency they are using. A 72MHz frequency checker, if you can still find one, is an excellent investment, especially if you intend flying your aircraft in public places.

If you join a club there will be a frequency control system in operation, if MHz systems are still in use. The normal method is to use a peg board, whereby each member who uses a MHz radio inserts a peg into the hole of the corresponding channel, thus letting other pilots know that that particular channel is occupied.
A typical rc flying club peg board will look something like this (with a bit of imagination)... Above: an rc flying club peg board. This example shows that channels 12, 16, 33, 45, and 58 are in use. These channels are not available until the pilot finishes flying and turns off his/her rc system, thus freeing up that channel.

It is fair to say, however, that the sight of a peg board is a rare thing these days. 2.4GHz radio systems are commonplace now, and such frequency control is not needed with them.

Designated frequencies in the 72MHz band

It's worth noting that rc cars and boats use frequencies in the 27 and 75MHz bands, and unfortunately some RTF planes do use 27MHz, although this is rare these days. So if someone is running an rc car or boat nearby it's a very good idea to ask them which frequency they are using, just in case.

The rc airplane frequencies and associated channel numbers in the 72MHz band are given in the following table:

It's so important not to ignore rc airplane frequencies, especially if you're flying in a public park. Always take a few minutes, before switching on your rc set, to check for other rc users in the area! 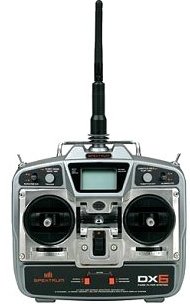 Well, actually that heading is somewhat of a misnomer.

2.4GHz radio control systems, now commonplace, use a different technology to the traditional MHz systems, and channel designation has been made redundant with these newer radios.

Although not 100% infallible, 2.4 gig rc systems do away with the old issue of unwelcome interference from other transmitters being operated nearby, and so frequency control is not needed. Just one reason why 2.4GHz radios are so great - you can just switch on and fly, without having to worry about who else is flying in the same area.

Designated frequencies for the UK.