The simple setup of aileron differential on rc airplanes can cause some confusion for beginners to the hobby who have heard the term but don't fully understand if, or why, they might need it.

Aileron differential simply means that the ailerons move more in one direction than the other, with the greater deflection being upwards. Ailerons that are set up this way are called differential ailerons.

The reason why ailerons are sometimes set up this way is to counteract any adverse yaw when the airplane is in a banked turn.

This adverse yaw occurs because a downward deflected aileron (i.e. the aileron on the outer wing during the turn) causes more drag than the upward deflected aileron, and this drag tries to pull the airplane out of the turn.
For example, if the plane is in a banked turn to the right, there's increased drag on the left hand wing (because of the down aileron) which causes an unwanted yaw to the left. 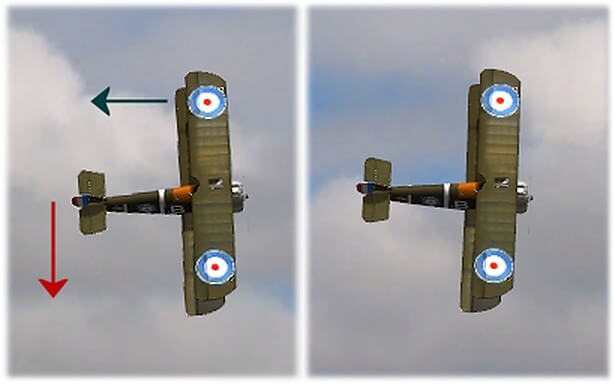 Above: WWI warbirds are classic 'tail droppers'; this picture shows the difference
between a turn with adverse yaw (left) and a tidier turn without (right). The blue arrow represents the drag on the outer wing which forces the tail downwards.

The correct fix for this common issue is to apply a small amount of rudder during the turn in coordination with the aileron deflection. It's how real planes are flown and is known as 'coordinated flying'. The deflected rudder forces the nose of the plane round in the direction it's turning, thus acting against the drag and so no tail-drop is seen.

Rudder can be applied manually during the turn (by using the rudder stick!) but a very easy and convenient fix if you have a computer-based transmitter with channel mixing capability is to mix rudder with aileron, so a small amount of rudder is automatically applied when you move the aileron stick. It's lazy, but effective!

Setting up some aileron differential is the other fix, particularly if you have an airplane that has a strong tenancy to drop its tail during a turn - some planes do it more than others - and especially if you're flying a plane without rudder control (i.e. aileron & elevator only).

Many computerised radios offer an aileron differential programming option if each aileron has its own servo, and this is a very easy fix. Refer to your transmitter instruction manual for the 'How to...' part.

If you don't have such a Tx and have just one servo operating both ailerons, you'll need to use a circular servo disc and connect the control rods to holes that are either in front of or behind the lateral centerline of the horn.
Whether the holes are in front of or behind the centerline depends on whether your plane is a high winger with servo in the underside of the wing, or a low winger with servo in the topside.

The accurate way of positioning the holes in the disc is to divide the disc in to three equal size areas, the lines separating each one being at 120 degrees to each other (if you're a heli flier you'll recognise the 120° swashplate servo pattern).
The simple illustration below shows why using offset holes causes aileron differential...

As you can see the aileron differential is achieved because although the fore and aft movements of the servo disc are equal (the blue arrows are the same length) the actual fore/aft travel is different; the red arrows show that the forward travel that the control rod goes through is less because much of the disc movement is actually sideways.

The particular set up shown above would work for a high wing plane with the servo mounted in the underside of the wing. The lesser amount of forward travel would be on the down-going aileron, via the pulling linkage. The longer travel would be on the up-going aileron, via the pushing linkage.
For a low winger with the servo mounted on the top surface, the linkage holes would be offset to the right of the centerline in the picture.

The actual amount of aileron differential you have to use will, of course, depend on the plane. Trial and error is the only way to find out, but typically you could have half the amount of downward deflection as upward. If you're setting up a Tx differential mix, try 30% for starters and work from there.
Again, it just depends on the aircraft in question and how badly it suffers from adverse yaw, if at all.

Do take the time to set up some aileron differential on your rc plane, if it needs it, or at least learn to fly by coordinating rudder and aileron correctly. Better to have tidy turns than messy ones!