If you're looking for an easy introduction to radio control helicopter flying, then coaxial rc helicopters can give you exactly that.

Electric coaxial helis, also called dual-rotor or contra-rotating helicopters, have helped bring thousands of new people in to the radio control flying hobby, and it's easy to see why; coaxial helicopters are very easy to fly and their inherent stability in the air makes them perfect first helicopters.
Of course, they're not limited to new pilots - very experienced rc heli pilots are having a great deal of fun with such aircraft too!

Shown below are a couple of examples, the Blade CX3, left, and its micro-size cousin the Blade mCX, right, both from E-flite, a well respected name in electric rc helicopters.

Coaxial rc helicopters like those from E-flite's Blade CX range can be purchased in Ready To Fly (RTF) form and can be flown with confidence pretty much straight from the box.

Such helis are much easier to master than a conventional single rotor/tail rotor helicopter and when trimmed correctly are very capable of holding a steady hover, even with thumbs off the transmitter sticks. This inherent stability exists in all (good) coaxial helis.

The E-flite (now "Blade") range of coaxials has proved to be a very popular one; these 'hobby grade' helicopters are backed up by a full range of spare parts and upgrade options are available for some of the aircraft. The helicopters are a great choice for anyone looking for a gentle and easy introduction to rc heli flying.

A conventional helicopter has a single main rotor consisting of two or more separate blades. When the motor powers up and turns the main blades a force called torque is naturally generated as a result of the spinning motion. The natural reaction to this torque is for the helicopter fuselage to want to spin in the opposite direction to the main blades, rather like when you twist an elastic band it naturally wants to unwind itself.

To counteract this torque a tail rotor is used to generate sideways thrust. The tail rotor is a vertically mounted rotor (essentially a small airplane propeller) which pushes air against the direction of fuselage rotation, thus preventing the helicopter from spinning wildly out of control.

Whichever method is used, the change in thrust controls the yaw of the helicopter i.e. which direction the nose is pointing, by either giving in to the natural reaction against the torque (lessening tail rotor thrust) or by pushing the helicopter round in the same direction as the main blades (increasing the thrust).

The illustration below shows these basic forces at work:

Coaxial rc helicopters, however, don't have a tail rotor and instead of a single main rotor they have two sets of main rotors, one mounted directly above the other. The two main rotors spin in opposite directions to each other, as the illustration below shows:

Because the blades are spinning against each other, each one cancels out any torque generated by the other one. As a result there is no tendency for the fuselage of the helicopter to spin round one way or the other.

This is only the case, however, so long as both sets of blades are spinning at exactly the same speed. As soon as one set changes speed relative to the other one, then torque is immediately generated.
This is exactly how yaw is controlled in coaxial rc helicopters, by making one set of blades spin faster or slower than the other set to purposely generate torque which will naturally cause the nose of the helicopter to point in a new direction. 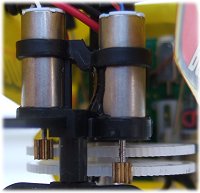 The lower blades of coaxial rc helicopters are mounted on a short hollow shaft inside of which is the longer main shaft, on which the top blades are mounted.
Twin side-by-side electric motors control one main drive gear wheel and hence one shaft each, and so independent rotor speed control is possible via a dual electronic speed controller (ESC). The picture to the right shows a typical coaxial setup for the main drive gear, with each motor pinion driving one of the main drive gear wheels. This photo is of my little Blade mCX.

You could be forgiven for thinking that rc helicopters with two sets of rotors are completely fictitious designs and unique to the radio control world, but there are a number of such full size helicopters.

The Russian helicopter manufacturer Kamov has produced several dual rotor helicopters for both civilian and military use, the KA32 shown below is one such example: 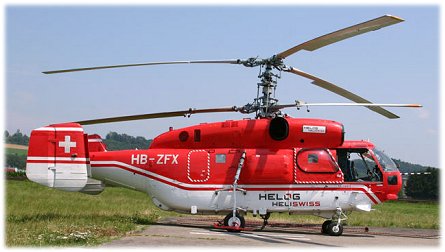 Dual main rotors give huge amounts of lifting power, and there's a notable safety factor with coaxial helicopters; no tail rotor means less danger when the helicopter is operating on or close to the ground. And in flight a failing tail rotor will almost definitely cause the helicopter to come down out of control. No tail rotor eliminates this risk.

Coaxial rc helicopters are, without doubt, the easiest and safest way of getting in to the hobby of flying radio control helicopters and they're suitable for anyone, regardless of helicopter-flying experience. They can easily be flown indoors but are equally suited to outdoor flying also.

It should be mentioned at this point that flying a coaxial heli isn't as rewarding as a conventional single rotor helicopter. A typical radio control coaxial helicopter cannot perform banked turns very well and the forward flying speed is relatively low. So flat, steady flight and easy hovering is what you can expect from the majority of coaxials.
But for an easy introduction to flying a radio control heli, then a coaxial is the way to go!