- ways to get airborne

Launching rc gliders that are of the non-powered variety can be done in a few different ways, all of which are fairly easy to understand. Some are easier to do than others though.

This page will give you a brief insight in to how it's done, by giving an explanation of the principle methods of rc glider launch. Most of the following methods can be done alone, but two of them require help from a fellow flyer.
The methods are:

A hand launch is the way that most rc gliders are launched when slope soaring from a hillside or cliff top, but hand launching rc gliders can also be done from flat flying sites.

When hand launching your rc glider, it's very important to give it a firm push, from about head-height. This is to get the glider moving at a reasonable speed as it leaves your hand, so it won't stall and fall out of the sky. The animation to the right shows a good, definite launch.

Another important point to note is that you should make sure that the glider is horizontal as you launch it, or even pointing slightly downwards.
If you launch the glider with its nose pointing upwards there's a very good chance that it may stall and crash if the launch speed isn't fast enough. Or if the wind is strong, the glider can get lifted right out of your hand and taken backwards, completely out of control. If the nose is pointing slightly downwards then there is greater airflow over the top surface of the wing, so it won't get lifted out of your hand and blown over your head.

Once the glider is safely away from your hand and airborne, get your launching hand back onto the Tx sticks right away - your flight has begun!
You'll likely find that the glider gained initial height straight out of your hand - this is the lift from the wind. Immediately use a bit of down elevator to lower the nose of the glider and get it moving forwards, out over the slope. Getting that initial penetration in to the wind is very important, and it's only done by applying some down elevator to get the glider's forward speed up.

Incidentally, it is quite possible (and sometimes necessary) to launch larger gliders with both hands, and have the transmitter dangling on a neckstrap. Lone rc glider flyers with large models often have to do this.

Hand launching can also be done from flat ground, if you're thermal soaring. The difference here is that you need to throw the glider at a definite upward angle, as hard as you possibly can, while trying not to tear your arm muscles in the process!
RC gliders suitable for hand launching in this way are typically smaller (say up to 1500mm span) and commonly called 'chuckies'.

Discus Launched Gliders (DLGs) are a different breed of rc glider, designed with a particular launch method in mind.

A short pin through one wingtip is gripped between index and middle fingers, and then the pilot spins around 360 degrees before flinging the glider upwards - in a similar way to a discus being thrown in the athletic field event. The centrifugal force produced by the pre-launch spin is enough to launch the glider to a surprising height, and the design characteristics of DLGs are such that the aircraft naturally goes in to a steep climb immediately after launch.
The good thing with this form of glider launching is that you don't have to be strong, because the power comes from the technique.

DLGs are perfect for thermal soaring on a flat field.

Above: Discus launching a DLG.

Bungee launching rc gliders is completely different and can either be done on a gentle hillside or level ground.

To launch, the pilot attaches the line to the glider hook (a metal ring at the end of the line slides onto the hook) and walks backwards, so stretching the bungee. When a suitable stretch has been reached, the glider is released and the bungee then pulls the glider up to a good height, as the rubber retracts its stretch.

With a small pull back on the elevator stick at the top of its climb, the glider releases itself from the bungee and your flight commences. The bungee then falls back to earth and hopefully the parachute/pennant makes it easy to locate on the ground.

Like discus launching, bungee launches are perfect for thermal flying over a flat field, provided that you have the length to lay out, and stretch, the bungee.

Above: the principle of bungee launching an rc glider.

Launching larger rc gliders by aerotow should only be attempted by intermediate or advanced rc flyers.
The glider is towed up to altitude by a powered rc plane (tug), and then the towline release hook in the nose of the glider is activated and the glider is released from the tow plane.

Aerotowing requires skill and constant communicating between both pilots, and obviously the plane needs to be powerful enough to tow the glider without struggling.
Essentially, it's the tug pilot who has to do the hard work - the glider pilot really only needs to keep the wings level.

RC aerotowing is the most common for getting larger rc gliders airborne to thermal soar.

Below is a short video I took at a local aerotow event - this is a 1/2 scale monster (but beautiful!) Wein glider being pulled aloft...

Of course, rc aerotowing can be done with most size gliders, and a combination like the UMX Carbon Cub SS and UMX ASK-21 glider is great for towing on a small scale! 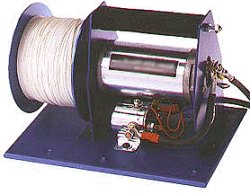 This is a similar method of launching rc gliders to a bungee launch, in that the glider is taken up by a long line. The difference is that the line is reeled in by a powerful winch, typically operated by a pedal switch at the pilot's feet.

Winch launching is easily done by a single pilot but, like a bungee, a good length of space is needed to lay out and set up the winch.

Once the desired altitude is reached, the pilot can put the glider into a steep dive, just for a second, and then pull up steeply to get the line off the tow hook. Or a more subtle approach can be used, as in a bungee launch.

Just like the Space Shuttle hitched a lift on the back of its modified 747 carriers from time to time, an rc glider can be carried aloft on the back of a larger rc plane, and then released at altitude.

This is probably the least common way of getting an rc glider airborne, but probably has the biggest novelty factor! It's also the most complex, as you need a reliable method of not only holding the glider to the plane, but also for its release.

Choosing the correct method of launching rc gliders really comes down to a few factors; where you are flying, what sort of flying you want to do and what type of glider you have. All methods work well for their intended purpose and you might find that you simply prefer one method of launch over another.
As you've read, some methods of launching rc gliders require two pilots while other methods can be safely done alone. Whichever launch method you try, be safe and take care!