Thermal soaring with an rc glider (sailplane) is a very relaxing radio control flying experience, but you need to understand some basic principles before you go thermal hunting.

Thermals are columns of air that are warmer than the air immediately surrounding them. Warm air is less dense than cool air, and so it rises up - rather like a helium filled balloon does. The rate of rise depends on the temperature of the column of air relative to the surrounding air; the higher the temperature, the less dense the air and so the faster and higher it will rise.

Thermals occur because the sun warms different surfaces at different rates; for example, water absorbs the sun's rays so thermals won't be present over the water, but the roof of a house, or a road, will be warmed by the sun quickly and so strong thermals will be generated over these types of surface.
As a general rule, darker coloured surfaces generate thermals because dark colours absorb heat, whereas lighter coloured surfaces reflect it and so they don't get a chance to warm up, and warm the air over them.

Good thermal soaring rc gliders will typically be upwards of 2 metre wingspan. As a nice example, take a look at the popular E-flite Mystique

. I've flown one of these and they really do perform well. 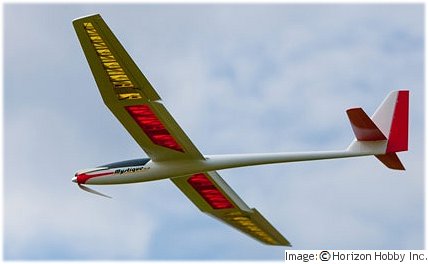 Above: the Mystique is perfect for rc thermal soaring.

Finding the thermals with an RC glider

For successful thermal soaring, the day needs to be warm and without too much wind, and you should be flying in an open, flat area.
Thermals are of course invisible, but a strong heat haze rising from a surface, or circling birds, can indicate the presence of thermals. Birds circling and rising, without flapping their wings, is a sure sign that they're enjoying a free ride in a thermal.

Finding thermals is really a case of trial-and-error for the first few flights, but once you've launched your glider to a good altitude, then you should be able to fly it around and pick out the thermals to keep it aloft. A good way of covering lots of sky quickly is to fly figure-of-eight patterns.

A tell-tale sign of finding a thermal is seeing the glider suddenly tip in one direction; this happens if one wing enters a thermal - the rising air lifts that wing, thus rolling the glider to one side.
If that happens, turn the glider in the opposite direction to that which it rolled to, and fly a tight Figure 8 pattern in that immediate area; you should soon find and fly into the thermal, and away you go!

Once you've found a strong thermal, the technique is to keep circling the glider within, or in and out of, the thermal to gain altitude. Keep in the thermal as much as you can, because as soon as the glider flies back into the cooler air then it will naturally start to sink as gravity takes the place of the warm rising air.

Above: using a thermal to keep aloft.

The video below shows some basic thermal soaring, as performed on the RealFlight rc flight simulator

Because you are flying from a flat area, and not slope soaring, you need to get your glider high by the methods discussed on the launching rc gliders page. These include bungee, towline, discus and hand launching. Or, of course, you might have a powered glider, or 'e-soarer'. This is the easiest option!

If the day is hot and the thermals are strong, you won't need to get your glider too high initially - as soon as you fly it into a good thermal then the warm air will carry the glider upwards, and your thermal soaring has begun.

There is something to beware of when rc thermal soaring - losing your glider! A strong thermal can have a surprising amount of energy, plenty enough to take a model glider up at an alarming rate.
While the idea of thermal soaring is to gain altitude, it's very possible to get caught out and have the glider disappear from view if it's in a strong thermal.
If it looks like this could be happening, fly the glider in a straight line out of the thermal as quickly as possible. Flying in a straight line while diving the glider (no need to dive too steeply) usually recovers the situation.

Thermal soaring with an rc glider is a very relaxing experience, yet one that requires a certain degree of concentration. Actively seeking out strong thermals and learning how to use the rising air effectively takes practice, but is ultimately very rewarding. Why not give it a go?!