The absolute fundamental purpose of your rc system is, of course, to control the directional movement of your aircraft, with auxiliary functions being controlled in a secondary manner.
Incidentally, if you don't already know, each controllable function of a radio controlled model is referred to as a 'channel' i.e. a single-channel rc aircraft will have control to just one function, whilst a six-channel aircraft will have six controllable functions.

There are essentially two basic categories of radio control systems - surface radios for use with rc cars, boats and other land-based vehicles, and air radios for aircraft.

These days, it's common for a two-channel surface radio to be of the 'pistol grip' design, but two-channel traditional 'stick' transmitters can also be bought and these can be used for simpler rc aircraft, notably gliders.

A multi-channel air radio features two sticks and additional switches, but the big difference between stick transmitters of two or 4+ channels is how the sticks move, as illustrated in the following picture... On a 2-channel stick transmitter in use with an rc glider, for example, the right hand stick moves from left to right, with a natural centre i.e. the stick is sprung.
To correspond naturally with the control of the glider, this stick moves the rudder, or perhaps ailerons instead. Either way, this stick controls the left/right directional control of the glider. Moving the stick left will steer the glider to the left, and vice versa.

The radio control functions of a multi-channel transmitter (shown above, right) become more complicated because each stick moves up and down and left and right. The right hand stick will, for example (*see below), control elevator (up/down) and aileron (left/right) whilst the left hand stick will control throttle (up/down) and rudder (left/right).

Learning to control two actions with one stick may sound complicated but is mastered with practice and will soon become second nature.

But which transmitter mode is right for you?
Well, if you learn to fly rc planes at a club then the choice will more than likely be made for you, by your instructor and the airplane you are learning on. By far the most common mode nowadays is Mode 2, and the majority of Ready To Fly rc planes are sold with a M2 transmitter, with Mode 1 being the second option. Modes 3 and 4 are not widely used.

There are pros and cons to the different modes, and no mode is wrong or right. Having the ailerons and elevator on the same stick (Mode 2) puts both primary controls in one place and correspond to a real airplane's joystick (although this isn't particularly relevant to rc flying), whilst having the two primary controls on separate sticks (Mode 1) means there's less chance of you inadvertently changing one input while moving the other.

Whichever mode you end up flying with, the chances are that you'll stay with that one for all your flying days. Once you've learned one mode, it's very difficult to start flying on another!

, if you're looking to buy. 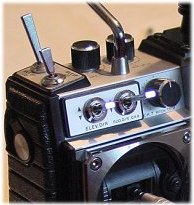 Aside from the main stick controls, additional channels are found on toggle switches and/or rotating dials and sliders, all of which can be located on the face or top of the transmitter within easy fingertip reach (the photo shows the top left corner of a transmitter with many extra channels). These extra channels can be utilised to control, for example, flaps and retractable landing gear, and functions such as dual rates will commonly be operated by such switches.
All channels over and above the four primary ones are called auxiliary channels.

, if you're looking to buy. 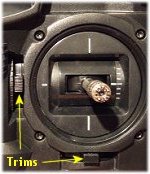 All rc transmitters, with the exception of the cheapest toy ones, have a function that allows you to 'trim' your aircraft while it is being flown.

Small trim sliders or buttons, also simply called trims, are located adjacent to each stick, one for each direction in which the stick moves. The trims can be analogue (as pictured right), in which case they are held in place with a simple ratchet system, or, more commonly, digital in which case they are small buttons.

Each trim has exactly the same effect as its parent stick, only to a much finer degree; essentially the trims fine tune the servo deflection of the aircraft and they are used to smooth out any unwanted tendencies of the aircraft in the air. The aim of trimming is to get your airplane flying as straight and level as possible with the main transmitter sticks in their central positions, and with no input from you.

It's quite normal to have to adjust the trims throughout each flying session, as outside factors can affect the aircraft's flight characteristics. But once the trims have been set, they can be left alone until the natural flight path of the aircraft changes and they have to be adjusted again.
Read more about trimming your rc airplane.

When talking about channels, there are 2 different meanings in the radio control world; the number of channels an rc system has, as mentioned earlier up the page, and the frequency channel that the system operates on.

Because all radio control systems send out radio signals, just as a traditional radio or TV broadcasting station does, various frequency channels are needed so that more than one rc system can be operated at the same time. So, in most parts of the world, certain channels have been designated, by law, for radio control models and must be adhered to for safety reasons. RC aircraft have their own set of channels while rc surface vehicles have theirs.
For more detailed information on this very important aspect of radio control, see the rc airplane frequencies page.

But with the above in mind, frequency channel control only applies to MHz radio control systems; the newer - and now commonplace - 2.4GHz systems use a different technology, and so frequency channel designation does not apply to them.

A further point to remember when referring to radio frequencies used for models is the modulation. The word modulation refers to the whole process of the radio signal being sent out by the transmitter, received by the receiver and passed on to the servos.
The two standard types of modulation are AM (Amplitude Modulation) and FM (Frequency Modulation), the latter being sub-divided into PPM (Pulse Position Modulation) and PCM (Pulse Code Modulation).

In a nutshell, PCM is the modern digital successor to PPM and does a far better job of guarding against unwanted interference. FM is the most commonly used by nearly all rc aircraft pilots*, while AM is often used on 2 channel surface vehicles and rc toys.

*NB: while the traditional FM MHz rc systems are still in use, the newer 2.4GHz spread spectrum have all but replaced them. Such systems use a completely different frequency band and technology, and it's only a matter of time before the MHz rc systems go the way of the dodo.

Whichever rc system you have, understanding the radio control functions and features on it is very important, to get the most out of it. As with all things in life, it's not necessary to buy the all-singing, all-dancing, most expensive set you can lay your hands on, but do be satisfied that your system will be able to control your aircraft in all the ways that you need.

When you do buy a more advanced radio control system, take the time to get to know it, and your hobby will be that much more rewarding.

Shopping for an RC system?

If you're in the market for a radio control system then buy the best you can comfortably afford. If you buy cheap, you pay the price later on down the line, when it fails on you.
RC manufacturers I can recommend include Spektrum, JR, Futaba, HiTech, FrSky, Multiplex, Graupner, to name a few (in no particular order). Amazon is a good as place as any to buy from these days, follow the product suggestions below to go there...